skip to main | skip to sidebar

What if my boyfriend looks at other girls? 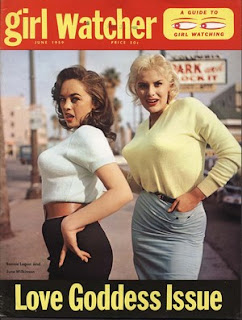 Dear Suhail, I've noticed lately that "Terry" can't keep his eyes off of other girls' asses. He thinks I don't notice. Does this mean he is not attracted to me anymore? Sincerely, Self-Conscious Sally

Dear Sally,
Be careful what you read into a roving eye.   Humans are visual animals. Lots of people like to look at asses.  Relationships are not about putting on blinders.  Maybe "Terry" just likes looking at asses. He probably has his eyes on your ass, too.  Don't you enjoy seeing other attractive bodies, whether you are in a relationship or not?  Most people do.
PD's Woman Up writer Mia Navarro said "Over the years I've realized that the literal roving eye is more misdemeanor than felony. It doesn't bother me anymore as long as the once-over is quick and doesn't linger or keep repeating itself."

The point is not to read his looking at asses as a clue that he is not attracted to you.  People use visual stimuli to spark their desires and emotions, like models in advertisements and magazine spreads, or sexy movie stars.   Where his eyes go while you're out walking is not quite as important as where his hands go when he's turned on, or where his thoughts go when he needs intimacy.
At the same time, you must not ignore that you feel he's not as attracted to you lately.  Something is making you feel unattractive.  This feeling is triggered when he glances at other girls.  What are some other things that trigger this feeling of unattractiveness?  Group them together and start a conversation.  The only way to resolve this is the magic of communication. Don't treat his roving eye like a speaking mouth.
Being in a relationship occasionally calls upon you to do things you don't want to do - like speak.  Communicate with "Terry."  Give him the benefit of the doubt.  Tell him you feel like he is not attracted to you lately.  Start a conversation about sexual fantasies or nice butts and see where it leads.  Who knows, you may happily discover that "Terry" is shyly harboring some new ass related fantasy that you find super hot, something that will spice up the bedroom tonight.  Or you may discover that the relationship is entering another unexplored arena.  Together, you can do something about it.

Need a lighthouse in the winsome fog of love and relationships? Ask Suhail.

-Suhail.
Suhail Rafidi is a novelist and educator whose works explore the destiny of human values in a technological landscape. You can find him on Twitter, too, @shelldive.